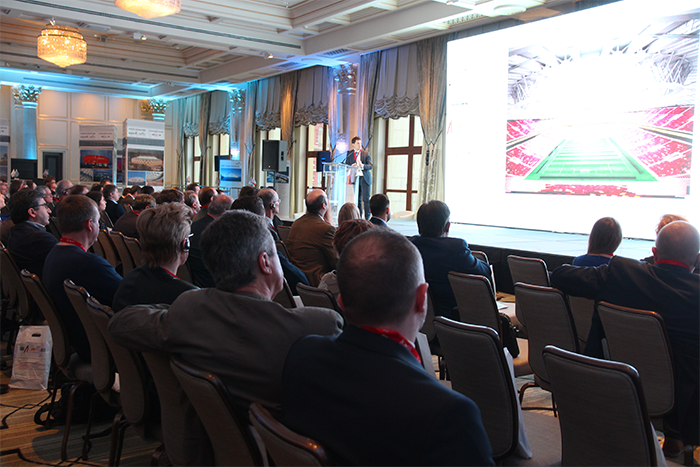 On December 15th in Moscow in Four Seasons Hotel there was a conference Arena Design Forum: trends of sports architecture. The organizers of the event were the Association of Specialists in Textile Architecture and Membrane Structures “TexSteel” and magazine "SBC. Sports Business Consulting" The General sponsor was 'LOMMETA' CG.

The start of the conference was given by the main architect of Moscow, Sergey Kuznetsov. According to the main architect, the interest to the sports infrastructure appeared already at university times - the diploma work at the Moscow Architectural University was devoted to a sports object. Today, special attention is paid to the development of sports infrastructure in the capital. 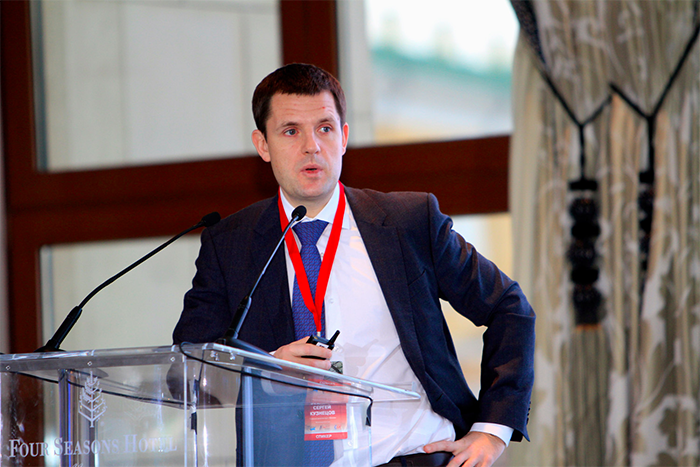 At the moment, there is a boom of sports development in Moscow. 13900 sports objects function in the city now, 33 of them are new and were put in operation during the past five years. The main project in this sphere is undoubtedly the "Luzhniki", which needed to have the historical part left, not ground into dust. As According to Kuznetsov, it will be one of the best examples in the world for reconstructing cultural sports objects.

General Director of 'LOMMETA' CG, the chairman of Association "TexSteel" Andrey Moroz was the second speaker of the conference. He said that the aim of creating the association was the possibility to carry out works at the Russian stadia by a Russian company. In order to do so, foreign companies with rich experience were attracted. 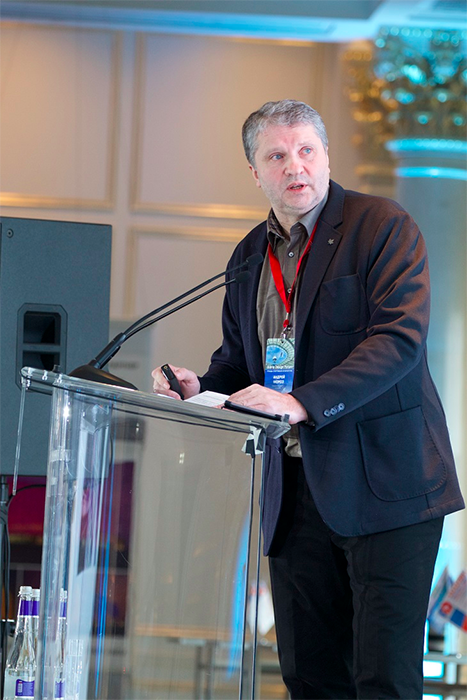 At the moment, 'LOMMETA' is the only company in Russia having a complex of equipment for processing any architectural textile, as well as an organized chain of manufacture and design.

With the application of textile, objects for mass sports can be transformed and turn out to be much cheaper. Besides, over the last 50 years the chemical industry has made a step forward by creating PVC, ETFE and PTFE which are more durable and long lasting than steel.

Michael Kiefer, the founder of Kiefer. Textile Architectur, talked about the possible architectural solutions which are reached by various fixation of membrane structures. Shapes of a hyperbolic paraboloid, cone, arch with fixation and filled shape with curvature in any direction allow almost any ideas of architects to be realized. 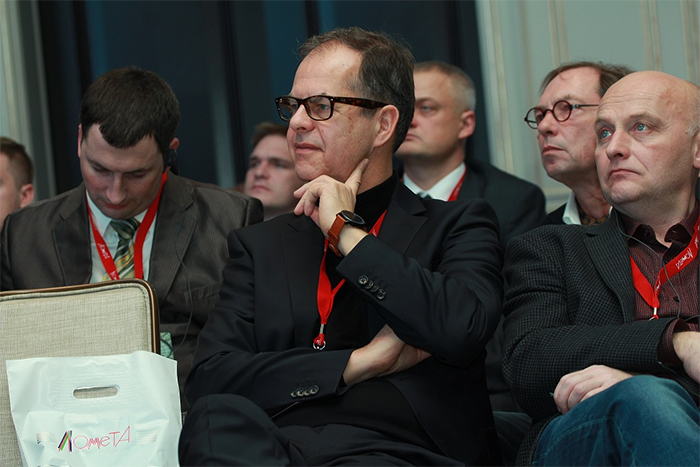 Galina Gordyushina, the deputy director of design of MOSINGPROEKT about the reconstruction of the main arena of the future world championship in soccer - The Big sports arena "Luzhniki". The historical image of the building which is a part of soul of any Russian sports fan will be kept, but modern elements will be added to the facades, notably perforated metal panels with sports theme illustrations. A unique system of cascade stairs will allow people to move freely among the sectors. Inside the bowl historical alleys will be organized, as well as alleys of  paintings, photography and illustrations of legendary persons.

Besides this, the stadium will meet all of the most modern requirements. It will be provided with WIFI of high density, Digital Signage systems and electronic commentators will work there, and the media roofing will allow to display the main information about the matches for access from the  observation deck at the Vorobyovy Gory. 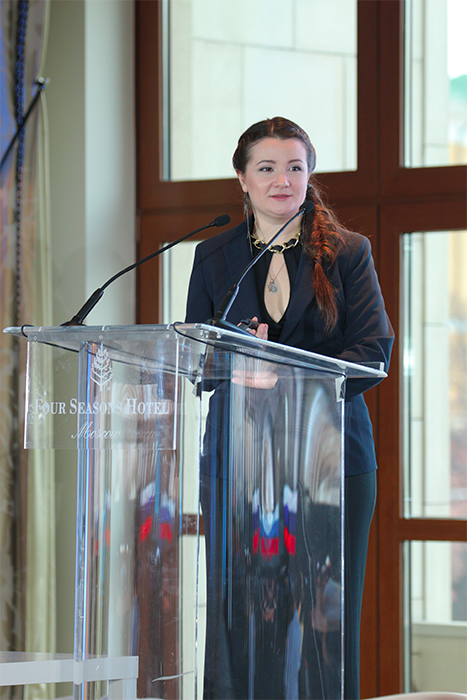 After the coffee-break the word was given to architects who talked about sports projects that were realized and are being realized in different parts of the world.

The session was opened by the Director of Arup Sport, Martin Simpson. In his opinion, design of a stadium is a multidisciplinary task requiring a holistic approach. Absolutely everything matters - from the geometry of the bowl of the stadium to the choice of the roofing materials providing comfortable temperature. 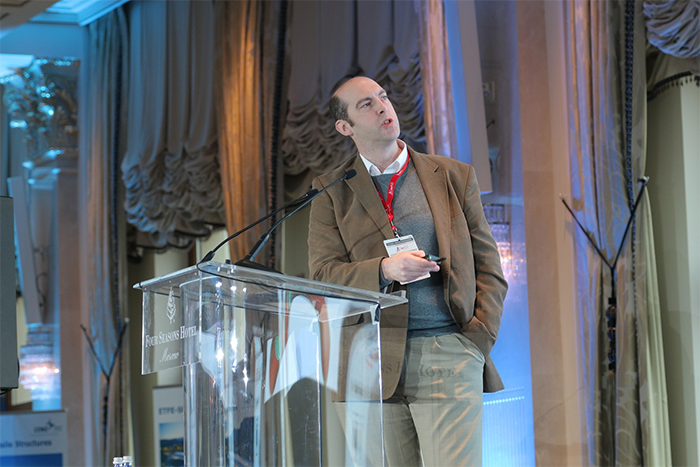 Ulrich Merres, architect of Tilke GmbH& Co. KG, talked about a number of 'Formula-1' race circuits designed with his participation. They are divided into two types - designed within the precincts of the city and in empty places. Circuits in Valencia and Baku, where holding of the Grand Prix is provided by temporary structures relates to the first. A number of circuits in the Middle East and in Asia, where the architects had their own ideas, corresponds to the second. So, the tribunes in Malaysia remind you of a leaf of a banana tree, in Shanghai - of a lotus flower, in Bahrain there is reference to medieval architecture, and in Abu Dhabi a stadium is built into the circuit. 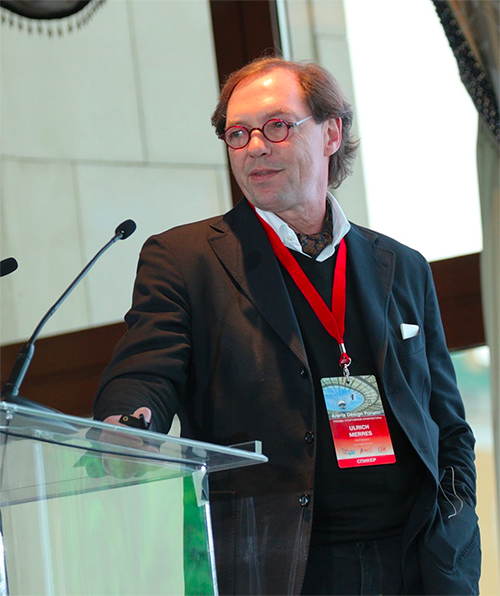 Igor Markov, the architect of gmp, described the rich working experience of the bureau with textile materials. Everything started with the project of reconstruction of the Olympic stadium in Berlin in 200, and it continued with projects all over the world, which received the largest tournaments. The 'Krasnodar' Football Stadium was created with Markov's participation. Close cooperation with the client Sergey Galitskiy, who was controlling every detail, was conducted there. According to the words of Markov, this is exactly the approach that modern architecture lacks. 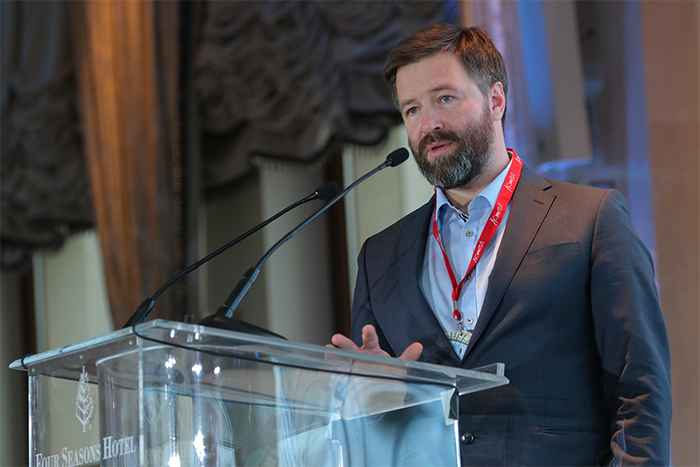 Andreas Hater, Project Manager of CENO Tec, indicated three important components of successful realization of a complicated multi-step project requiring control at every step. The first is the choice of specialists knowing the properties of the available materials. The second is competent engineering work. The third is the choice of the membrane manufacturer with work experience. 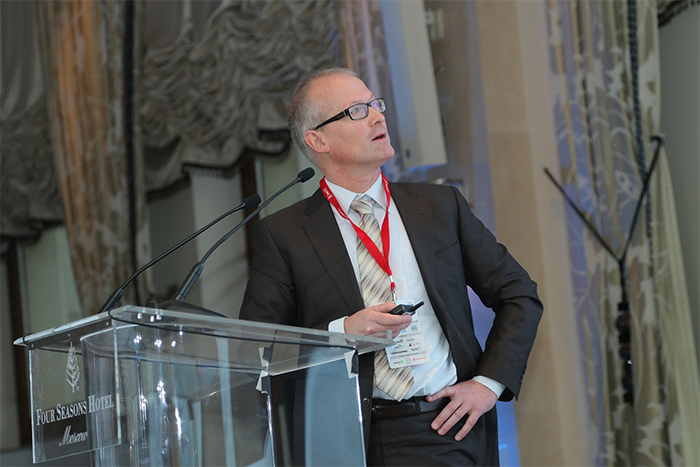 Erick van Egeraat, the Director of bureau Erick van Egeraat Architects, explained the principles of a stable approach to city building with an example of redevelopment of the Feyenoord region in Rotterdam. By World Expo 2025, Rotterdam is to become a city advocating stable growth. In order to do so, clusters will be promoted uniting sectors of economy, and the 'Feyenoord' stadium will be the first stadium without carbon dioxide emissions , and the district around it will transform based on the same principles. 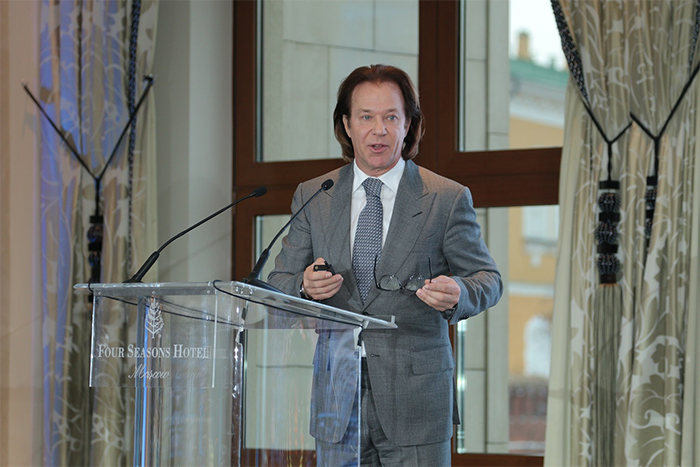 The afternoon session was given to the producers of materials for textile architecture. The founder of Vector Foiltec Ben Morris, the director of communications of NOWOFOL Sabine Mulnsterer, the managing director of formTL Gerd Shmid and director of international relations of Losberger Jean-Paul Sene told about the history of their companies, the history of PVC, ETFE and PTFE materials, and what is most important, about their almost unlimited application, from temporary module structures to the largest arenas in any weather conditions, of any shape or color. 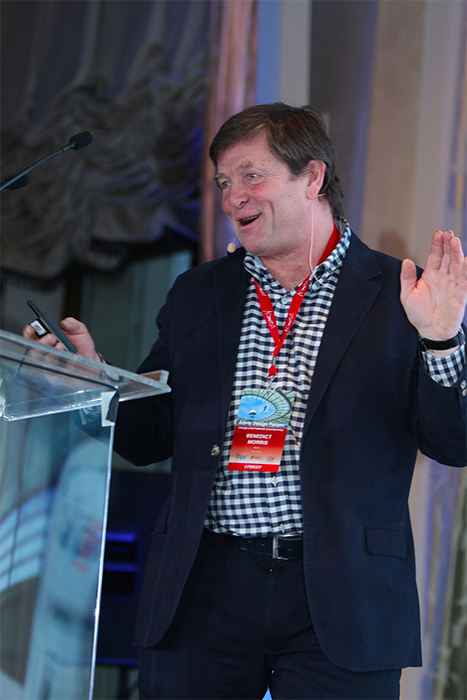 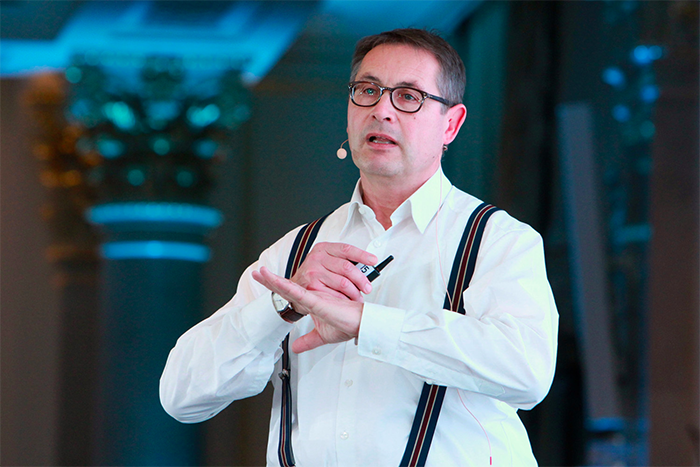 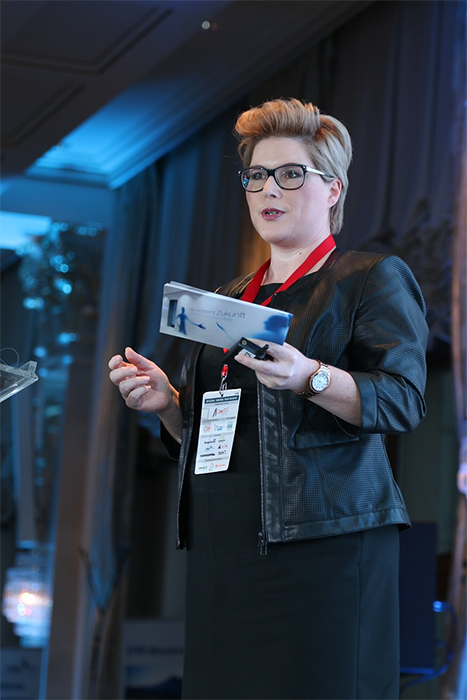 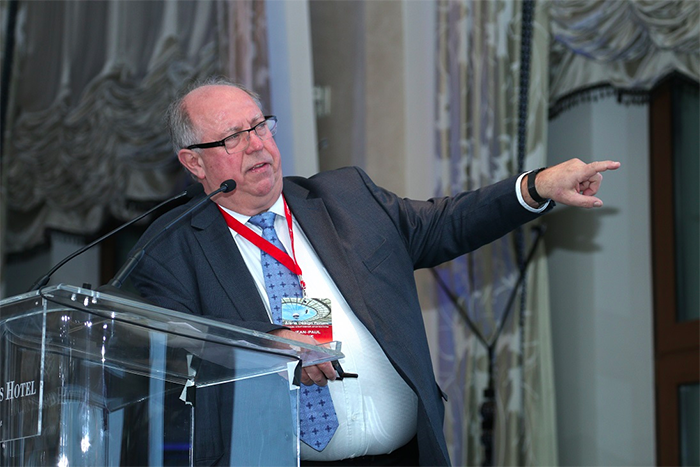 The final section contained the opinions of stadia operators about textile architecture. The first to express his opinion was the vice-president of arenaCom Thomas Schrader.  On the one hand, textile materials allow memorable design to be created, make the structures lighter, provide light effects on the facades. But on the other hand, they may cause some technical limitations, as well as they are characterized by higher expenditures in case of unskilled exploitation. During the period from 1996 to 2014, there were 83 stadia built or reconstructed in 23 countries of the world for large competitions, and 51 of them (67%) di not justify the huge investments. 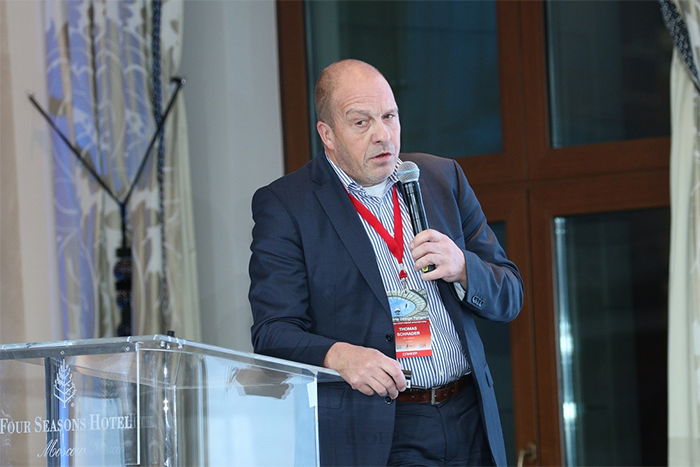 The heads of the stadia in Russia and Europe in the panel under the management of the director of development of SBC magazine Aleksandra Savraeva were looking into what is necessary for the arenas to justify the expectations and the means of the taxpayers after all. Vice -president of IMG Luis Silva believes that skillful exploitation is provided by skillful design. Kimmo Kivisilta, the general director of Hartwall Arena in Helsinki noted that no fashionable facade can provide economical stability without often holding events. Radik Minnakhmetov, the general director of 'Kazan-Arena' complained that his team was not involved in the work on the stadium from the very beginning, that is why some aspects of the business model had to be redone almost on the run. Aleksandr Atamanenko, the commercial director of FC 'Spartak', agreed with his colleague from Kazan, that the earlier the operator of the stadium is involved in the work, the better. 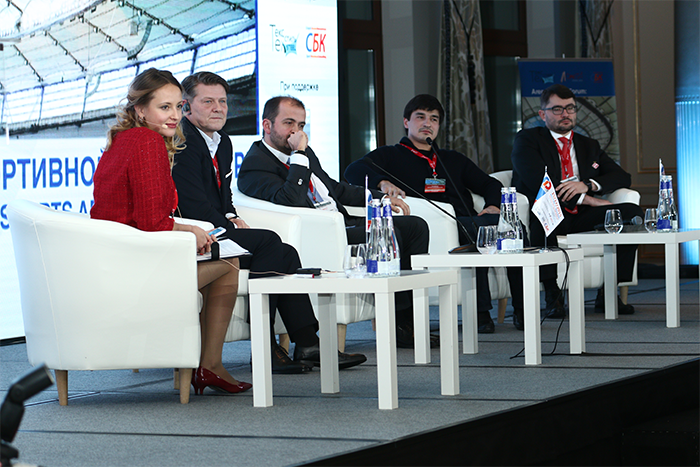 After the event was over, the guests could enjoy the performance of a Ladies Show-Orchestra 'TANSLU', a lottery with prizes from 'LOMMETA' company and a  festive stand-up meal. 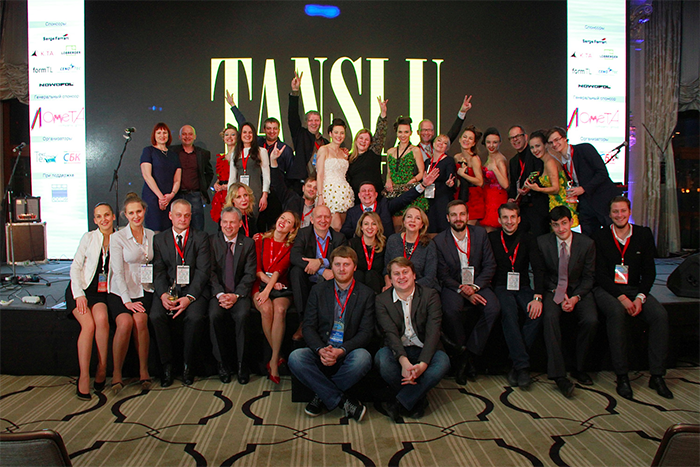 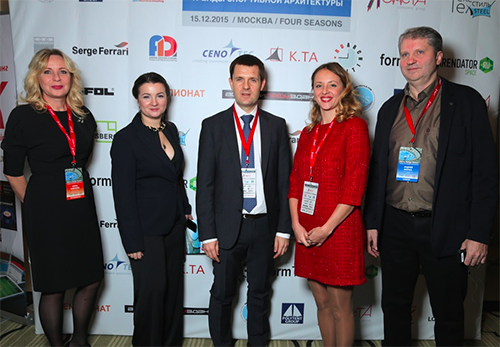